In some leading countries of Southeast Asia, social networks proved to be an important tool in E-Commerce. Online merchants use them to channel traffic to their online shops, while customers utilize social networks to find information about online product offering, and to leave reviews after an online purchase. Thailand and Indonesia, two of the major markets in the emerging Southeast Asia, both boast high numbers of social networking users, many of whom check their social network pages via mobile phones. Facebook.com is the number one most visited website both in Thailand and Indonesia.

In Thailand, Facebook is viewed as the primary platform to research information about a purchase, mainly by mobile shoppers. For them, it is an even more popular source of product information than E-Commerce websites. In a recent survey, half of the respondents in Thailand admitted having purchased products that they found through Facebook. Furthermore, in order to share experiences about the purchase, a third resort to Facebook again. Similarly, in Indonesia close to a half of online shoppers use social networks to make purchases. Social networking sites are the second most popular destination after online stores.

A major online retailer and marketplace in Southeast Asia, Lazada, generates over 2% of its traffic in Indonesia and twice as much traffic in Thailand via social networks.  Almost all of this comes from Facebook, with Youtube in second place. This pattern should be considered by online merchants willing to participate in the fast evolving B2C E-Commerce in Southeast Asia.

For more information about recent online retailing trends in Indonesia and Thailand , please view key findings of the respective reports in our online shop here, as well as relevant press releases and infographics here.

Adformatie.nl: Asian countries have been champions in cross-border online shopping 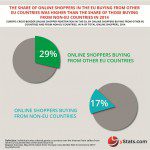