B2C E-Commerce sales in the Philippines to take off by 2025, reveals new report by yStats.com

“Philippines B2C E-Commerce Market 2019” is the title of a new publication released by Germany-based secondary market research company yStats.com. The report includes a prediction of growth in online retail sales in the country, spurred by increasing Internet connectivity, soaring M-Commerce penetration rates and the government’s support for the segment.

B2C-Commerce in the Philippines is still in its early stages of development, with the country ranking behind other top Southeast Asian markets in terms of online retail sales. Despite having the second largest population size in the region, the Philippines E-Commerce accounted for just mid one-digit value of the total online retail sales of the region’s top six markets in 2018. However, strong economic growth, a rising middle class and young population, paired with a growing number of Internet and smartphone users as well as government’s initiatives, are driving E-Commerce in the country. B2C E-Commerce sales in the Philippines are expected to show annual double-digit growth and outrank some of the currently more developed markets in the region, such as Malaysia and Singapore, by 2025. 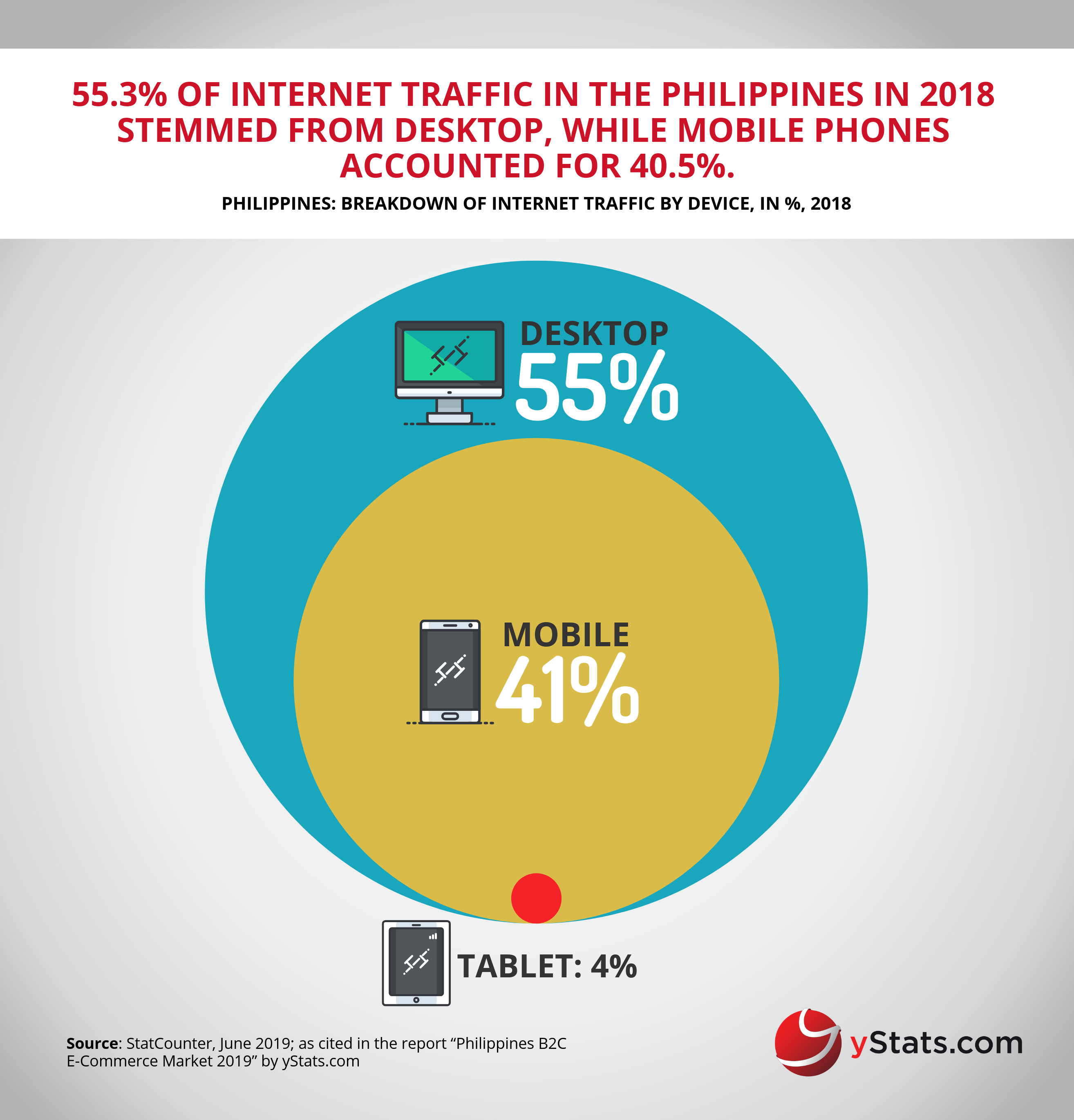 The Philippine Internet audience is one of the fastest growing in the world. In 2018, Internet penetration was projected at almost 7 out of 10 individuals, according to yStats. Also, M-Commerce is on the rise with four out of seven Filipino Internet users opting for online shopping via a mobile device in 2018, according to a survey referenced in the yStats.com report. Furthermore, social commerce is an emerging trend in the Philippines. According to sources cited in the yStats report, Facebook was ranked the most popular social media site in the Philippines in 2018 and the third most popular shopping platform for purchasing certain categories of products online.

The principal online shopping destination for Filipino online shoppers as of Q1 2019 was Lazada, a Southeast Asian online retailer and marketplace, majority stake-owned by the Alibaba Group. Second-ranked Singapore–based Shopee Philippines also lists second by mobile app visits, after Lazada app. The remaining players of the top five on the Filipino online retail scene include Zalora Philippines, Argomall and eBay. The two market leaders, Lazada and Shopee, are predicted to experience further growth and distance themselves even further from the other market players. Both Lazada and Zalora are focusing on overcoming the challenges of the poor logistics infrastructure in the Philippines by establishing new fulfillment centers.