yStats.com reports: B2C E-Commerce in Central Asia and Caucasus has an untapped potential

B2C E-Commerce is only starting to evolve in the Central Asia and Caucasus region. Internet penetration is below 50% in the majority of its countries, with the exception of Azerbaijan and Kazakhstan, and access to financial services reaches over half of the population in Kazakhstan only. However, as the report by yStats.com shows, as infrastructure improves and Internet penetration increases, B2C E-Commerce in the countries of Central Asia and Caucasus could grow as well. 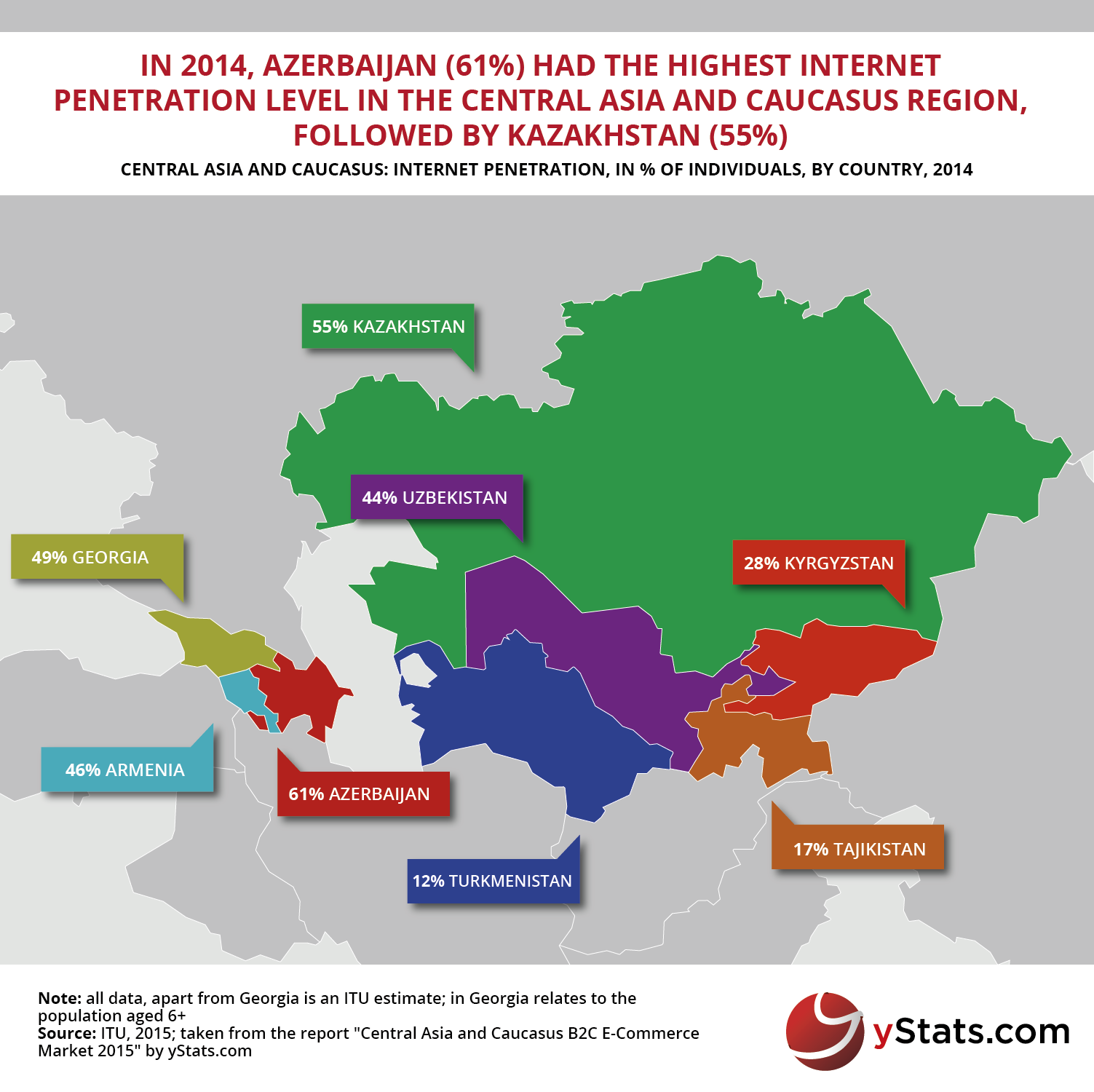 Kazakhstan is a regional leader in B2C E-Commerce, though there, too, online retail has much room for growth. B2C E-Commerce accounted for below 2% of total retail sales in Kazakhstan last year, but online retail is predicted to maintain high double-digit growth rates. Online shoppers in Kazakhstan are motivated to engage in E-Commerce as a result of wide product selection, convenience and low prices, as yStats.com’s report shows. Cross-border B2C E-Commerce is a significant trend, as foreign online shops account for the largest share of online sales. Of the top five online retailers by sales in 2014, three were based in foreign countries. However, as local offering is improving, online retailers from Kazakhstan, such as Arena S and Chocofamily Holding, increase their share.

Another country with rapid B2C E-Commerce growth is Azerbaijan, according to yStats.com’s findings. In the first seven months of 2015, online retail sales in Azerbaijan already exceeded the total number for the full year 2014. Still, B2C E-Commerce’s share of total retail sales was less than 1% last year. The driving force behind both Internet usage and online shopping growth is the population under 25 years old, accounting for close to half of all Internet users. Of them, a small double digit share shopped online in early 2015, preferring international platforms such as eBay.

The details in the yStats.com report reflect the untapped potential for B2C E-Commerce in the rest of the region. In countries such as Georgia and Armenia Internet penetration has significantly improved, getting closer to the 50% mark. In Uzbekistan, the most populous country in the region, Internet penetration is driven by mobile technology. Across these markets, international players such as Aliexpress.com, eBay.com, and Amazon.com beat local shopping websites in popularity. However, local players have gathered a significant audience on social networks, especially Facebook. Overall, as Internet penetration and infrastructure for delivery and payment improves, B2C E-Commerce in these countries is expected to grow further.