Germany-based global E-Commerce research organization yStats.com has published a new report, “Saudi Arabia B2C E-Commerce Market 2018”. The publication cites multiple trends and forecasts regarding the state of online retail in Saudi Arabia, including a prediction that by 2020 this country will overtake the UAE as the largest retail E-Commerce market in the GCC.

B2C E-Commerce in Saudi Arabia is nascent, accounting for only a small one-digit share of total retail sales. However, the country’s young population, high connectivity rates and advanced infrastructure are projected to propel the growth of E-Commerce sales over the next several years. By 2020, Saudi Arabia is expected to outpace the UAE as the largest online retail market in the Gulf Cooperation Council (GCC), according to a forecast cited in yStats.com’s report.

In 2017, more than three-quarters of the population had Internet access, and around nine in ten adults owned a smartphone. Internet-enabled mobile phones play an important role in the development of B2C E-Commerce in Saudi Arabia. With the majority of individuals using a smartphone to go online, nearly all of online shoppers made a purchase using this device, as yStats.com’s report reveals. Furthermore, smartphones are used by Saudi consumers to check prices and product reviews, while shipping companies rely on geolocation coordinates sent via mobile messaging services rather than on postal codes to deliver E-Commerce orders to customers.

Two other important trends affecting the growth of online retail in Saudi Arabia are social commerce and cross-border shopping. Consumers in Saudi Arabia are active social media users, with Facebook, Twitter and Instagram ranking among the ten most visited websites in the country. Consequently, major online and offline retailers, as well as independent sellers use these platforms to market their offerings. Between one-third and one-half of online shoppers in Saudi Arabia made purchases from social media sites, according to a survey from early 2017 cited by yStats.com. 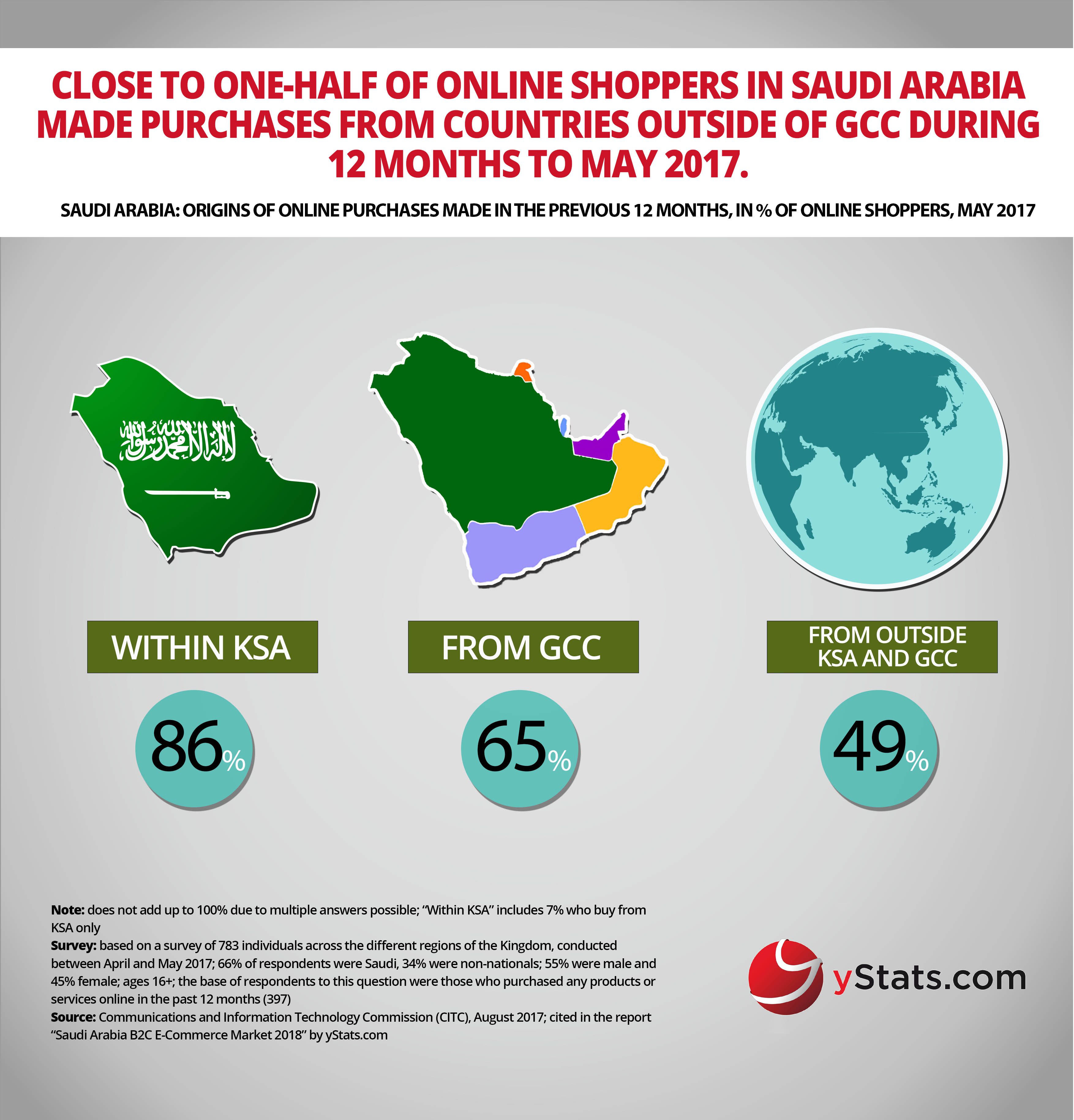 Regarding cross-border purchases, nearly two-thirds of online shoppers in Saudi Arabia buy on websites from other GCC countries, while nearly 50% shop on overseas websites. As a result, Amazon.com, eBay.com and Aliexpress.com are among the E-Commerce sites most visited by Internet users in the country. Nevertheless, regional player Souq.com, acquired by Amazon in 2017, continues to hold the highest market share in Saudi Arabian B2C E-Commerce.