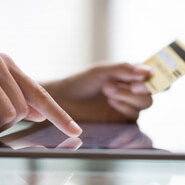 With the continuous rise of B2C E-Commerce, online payments around the world are also booming, with vast differences in the use of specific methods among the global regions and countries. Furthermore, the increasing use of alternative payment methods such as PayPal, as well as the introduction of innovative online payment services such as mobile wallets, brings the issues of online payment safety and security to the forefront again.

As of mid-2015, those aspects of the online shopping experience were considered critical for the adoption of mobile wallets, with approximately three quarters of customers naming data privacy and online payment security as key considerations when adopting new technologies. In well-developed B2C E-Commerce markets, such as the USA, in late 2015 credit cards were perceived by online shoppers as the safest method for online payments, while PayPal ranked higher than debit cards in this respect, despite being used by fewer customers.

Safety concerns seemed to also influence other Western markets, including Germany, where new regulations entered into force in November 2015, partially driven by online shoppers’ concerns with online payments’ safety and their demands for stricter security and privacy laws. According to the legislative changes, online retailers are required to double check users’ identity for purchases exceeding EUR 30 threshold, including via extra steps such as TAN identification. In the UK, over three quarters of customers believed that online retailers do not make sufficient efforts to protect their data, while the number of 3D-Secure transactions in France nearly doubled in a year to April 2015.

Also in developing markets, such as Brazil nearly one third of Internet users claimed that security is the reason they did not shop online in 2014. With the growth of B2C E-Commerce worldwide, and the ever increasing variety of alternative and innovative payment methods available for online purchases, security and data privacy are likely to remain crucial for online retailers’ success.

Further information regarding the global and regional trends in online payments is available in our new report: Global Online Payment Methods: Second Half 2015. 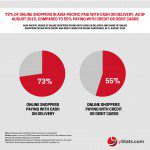