The developing markets of SE Asia offer insight, opportunities and perspectives that can help established markets learn valuable lessons. We’ve got a roundup of what’s happening now and in the near future. IndiaMart, one of the original e-commerce startups in India is thriving today. According to a report from yStats, fashion apparel was the top category for online and mobile commerce. TNS report highlights common and interesting practices in India and Indonesia markets. Rocket Internet SE merged its two ecommerce startups – Daraz and Kaymu which operate in more than 30 countries across Africa, Asia, and Europe.

BOV Capital launched a new $14.89 million VC fund targeting tech and e-commerce startups in Sri Lanka. Malaysian e-commerce is booming thanks to pioneering by startups like iPay88. While Philippines has only $30 million invested into local startups, more than $800 million flowed into Indonesia. E-commerce in Vietnam is growing fierce as Thai and Chinese acquisitions forcing local firms to respond.

How Dinesh Agarwal built the Alibaba of India

“There are around 10 million requests for quotations being generated on our platform each month,” says Dinesh. He has gotten smarter and put a payment barrier between a listed supplier and an interested buyer.

“This has removed a lot of spam too. Earlier, insurance companies, loan companies, even other websites would just pick data from our platform and list on their site,” he says. Now it’s an IndiaMart call center which comes between the supplier and buyer. The call center brokers the deal and provides relevant quotes to buyers.

The company also started Tolexo, a marketplace for industrial goods. IndiaMart earlier this year raised a series C round of an estimated US$19.4 million from investors led by Amadeus Capital, and followed by Westbridge, UK based Quona Capital and existing investor Intel Capital. Via Tech in Asia

According to the research firm, the fashion category ranked among the top products, both for online and mobile purchases. Clothing ranked first, second and third by B2C ecommerce sales among all product categories last year in China, South Korea and Japan, respectively.

“In South Korea, online channels accounted for more than 10 per cent of total retail sales of clothing and Japan was close to this number,” the report said. Countries like China, India, Indonesia and others recorded double-digit growth rates in B2C ecommerce sales of apparel, while India stood out with more than a 50 per cent growth in 2015. Via fibre2fashion.com 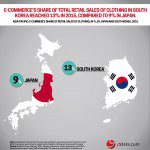 Ecommerce Magazin: The Chances of Proposed referendum on United Kingdom membership of the European Union…